In celebration of World Crocodile Day, landing annually on 17 June, the team at SEA LIFE Melbourne Aquarium has treated the resident saltwater crocodile Pinjarra with his favourite lunch – a whole turkey!

Measuring in at over 5 metres and weighing 750kg, Pinjarra is estimated to be approximately 60 years old.

Like all the aquatic animals at SEA LIFE Melbourne, Pinjarra is an ambassador for his species, playing an important role in educating the public on the ecological significance of marine species and the need for conservation and protection. 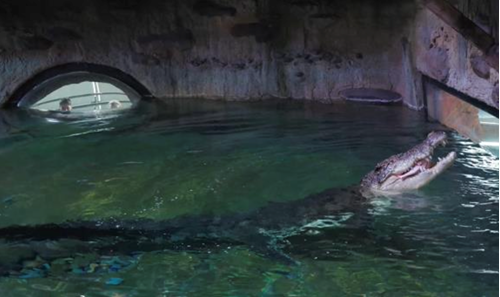 World Crocodile Day recognises the plight of crocodiles in the wild and aims to educate the public on these fascinating creatures.

“Saltwater crocodiles are an excellent example of successful animal conservation work in Australia. The species was almost extinct in Australia in the 1960s and 1970s as they were hunted for their meat and leather. The government stepped in and as a result crocodiles are protected and the population has bounced back,” said SEA LIFE Melbourne Aquarium Lead Aquarist Samuel Fawke.